Has Elastic lost its flex? 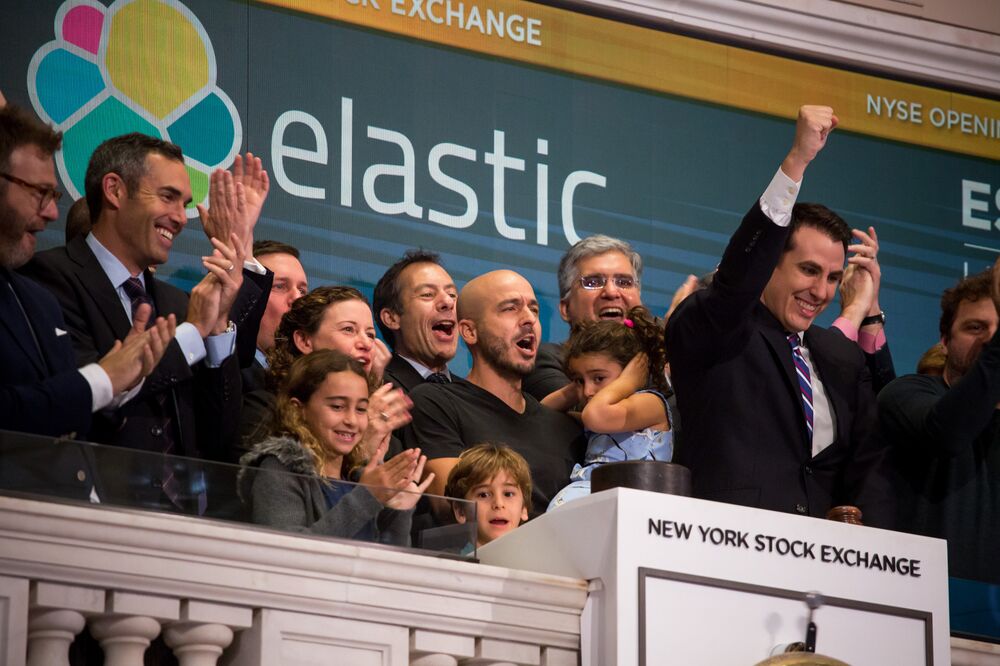 Amazon web services announced on Monday the release of Open Distro for Elasticsearch, a truly open source distribution of Elasticsearch including Amazon's own implementation of many of the features that differentiate the open source Elastic stack from the proprietary, paid versions. As a recent tech listing whose main product is one that I have myself used for years, this piqued my interest.

In this post, I want to touch briefly on what Elasticsearch is both as a suite of products and as a company, take a brief glimpse at their financials to work out what drives the business and then dive into what impact Amazon's release might have on Elastic's bottom line.

Elasticsearch is a distributed search engine built on top of the Apache Lucene project. Elasticsearch is often attributed with bringing distributed search into the mainstream software development ecosystem and out of the realm of specialists. Early versions of Elasticsearch provided an abstraction on top of Lucene, allowing it to be run in a distributed fashion, that is across multiple nodes, clusters, and availability zones (think servers, groups of servers, and geographies for the less technical). Elastic also offers thread-pooling queues and APIs for the management of clusters and monitoring of data, nodes and clusters.

As Elasticsearch grew in popularity, the Elastic business was set up under an open core model. Adam Jacob wrote a great article dissecting Elastic's approach to open source, and the problems their direction have caused for Amazon and arguably for Elastic's own users. I'm in no position to improve on Adam's thoughts here - what I want to discuss is what all of this means for Elastic as a public company (ESTC.NYS), and what pressure this newfound competition could place on its equity valuation.

Elastic first traded on the NYSE on the 5th of October 2018, up 94.4% on the day and its stock has performed fantastically until late February this year. Elastic has, in my view, at least, 3 core products. Their main offering is without a doubt Elasticsearch, with the other two being the Kibana visualisation dashboard for Elasticsearch data and Logstash which is a server-side data processing pipeline designed to preprocess data from disparate sources prior to storage in Elasticsearch of other datastores. Their model is to charge fees for license keys that enable key Elasticsearch features such as performance monitoring, security and authentication layers, while also offering commercial support, consulting and training to commercial clients.

Before we can determine how big an impact AWS' Opendistro release may have on Elastic, we need to understand where Elastic makes its revenues from, so let's take a look at their income statements. As Elastic is a recent filing, it becomes difficult to model historic results on a quarterly basis without relying on calculated numbers, so I'm going to work off of Q4 FY18 onward wherever I discuss growth trends. 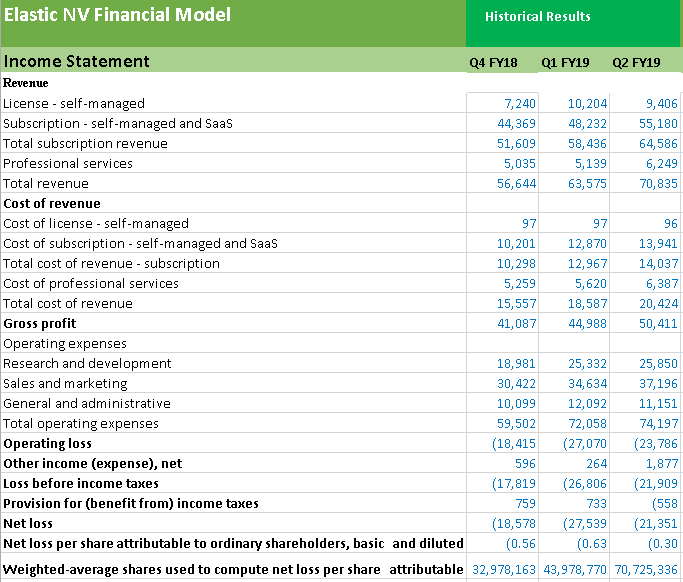 Summary of income statements for the recent three quarters

The above figure is a summary of ESTC's three recent quarterly income statements pulled from my excel model. The source of the data is ESTC's own 10Q and S1 filings with the SEC. The first key thing these statements tell us is that elastic breaks its revenues into self-managed licences, self-managed and Saas (software as a service), and professional services. The notes accompanying their filings elaborate:

From these notes and the above numbers, it would seem clear that the majority of Elastic's revenue comes from up-selling their users to paid licenses and hosted instances, however, it can be useful to quantify this so I've broken the revenue down to percentage per business unit, and amalgamated licensing and subscription as Elastic have done in the income statement.

From here (as shown in the above figure) it becomes plainly apparent just how important subscription revenue is to Elastic, as it accounts for on average over 91% of their revenue. Such a high-level view of revenue breakdown can be misleading, however, so it's important that we take this one step further and look into the gross margin of each of these segments individually, as well as of the amalgamated subscription segment vs professional services to which is really driving the bottom line. This is particularly important as Elastic is still making a small net loss quarter on quarter.

The figure above shows Elastic's gross margin per segment, which will be of particular importance when we discuss how Amazon's release of Opendistro for Elasticsearch may place pressure on Elastic's bottom line. From here we gain an understanding of the importance of the varying revenue segments to Elastic's operations, with self-managed licensing (aka the purchasing of license keys to unlock proprietary features of the Elastic stack) being sold at an incredible ~99% margin, Elastic cloud being sold at a strong margin in the mid 70s percentage wise over recent quarters, and professional services being sold at a loss. From this, we can form the opinion that professional services including consulting and training are being offered to support licensing and subscription clients, and likely in some cases to increase the LTV of individual customers. As such converting users of Elastic's open source software to paid subscribers is crucial to the company's financial performance, and the company states as much in the notes of their most recent 10Q filing "Our financial performance depends on growing our paid customer base by converting free users of our software into paid subscribers." Elastic's own summary of their revenue generation process goes on to state "Our revenue is primarily generated through the sale of time-based subscriptions to software which is either self-managed by the user or hosted and managed by us in the cloud. Subscriptions provide access to paid proprietary software features and access to support for our paid and unpaid proprietary software."

Elastic's summary of their business model "Our business model is based on a combination of open source and proprietary software. We market and distribute the Elastic Stack and our solutions using an open source distribution strategy. Developers are able to download our software directly from our website. Many features of our software can be used free of charge. Some are only available through paid subscriptions, which include access to specific proprietary features and also include support. These paid features can be unlocked without the need to re-deploy the software." Unfortunately for them, key among these proprietary features are an authentication layer, security improvements, and monitoring services all of which are included in Amazon's own release.

What this means is that the key drivers for Elastic's users to switch to paid versions of their stack are now being offered for free by a company with seemingly endless software engineering resources under a truly open-source model. This also means that users of Amazon's Elastic distribution have input into how the product moves forward, as well as the ability to benefit from changes made by other users globally - a key component of the opensource software model that is missing under Elastic's open-core model.

It would appear that the main reason to stick with an Elastic license now is for access to their professional services arm (which clearly being utilised by a very small proportion of their customers) and for the support included in the license. With professional services being a loss-making segment of Elastic's business, and the support likely being able to be replaced by a mix of a truly open-source community and AWS' brilliant developer support programs and free training sessions and webinars, it would appear that Elastic may be in significant trouble as a business going forward, while I expect its open source software to grow stronger than ever. I would further expect Elastic's Elastic Cloud offering to suffer as AWS will almost certainly expand their Elastic offerings to include the monitoring and security modules as alternatives to AWS' own fantastic Cloudwatch, Cognito authentication system, and IAM role management system.

It will be interesting to see how Elastic deal with this new challenge, one that was ironically created by their business model itself. Will they go down the Cloudera / Hortonworks (who recently merged and have yet to report a profit) of offering professional services surrounding an open-source stack with which they have world-leading expertise, will they be acquired by one of AWS' lagging competitors ( perhaps IBM who just bought Redhat in an attempt to bolster their own fledgling cloud arm) or will they stay the course and fight incoming margin pressures whilst seeking to build more proprietary features to lure users to paid licenses?

This update link alerts you to new Silvrback admin blog posts. A green bubble beside the link indicates a new post. Click the link to the admin blog and the bubble disappears.